From Death to Life: One Woman’s Struggle. 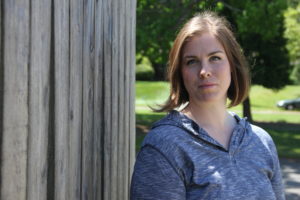 For the four years she was on the streets, Kathleen says she felt dead. That’s not surprising considering all she had to endure.

In addition to dumpster diving, losing weight, going hungry and not having anywhere to take a hot shower, she and other women on the streets face a reality that most men experiencing homelessness never have to deal with.

“I didn’t feel safe,” she remembers. “I would walk constantly all hours of the night, because I didn’t have a safe spot to be. If there was a spot, it would be with the drug dealer.”

Having nowhere but a crack house to sleep is bad enough. But it got worse.

“They wouldn’t let me stay unless I did sexual acts for them. If I wouldn’t do that, I would have to take off my clothes in front of them,” says Kathleen.

Kathleen’s life has been marked by men taking advantage of her. When she was 16, her boyfriend began sneaking her into bars and giving her drinks.

“By the time I felt like I had too much, it was already too late,” she says.

Alcohol led to drugs, which is how she ended up on the streets.

The Weight of Shame

In all of this, Kathleen was ashamed. She didn’t want to go out in public or ask for help because she was afraid of what others would think of her.

“You feel embarrassed,” she says.

But even in her pain and embarrassment, she didn’t know how to escape.

“I literally felt like there were chains on me holding me down, holding me back from something. I had no idea that you’re supposed to pray to Jesus and ask him to release you.”

Now Kathleen knows that she can turn to Jesus. With the support of partners like you, she was able to get the meals, shelter, counseling and care she needed to escape her old life.

“I feel like I can breathe now. Before, I felt dead,” she says.

Kathleen is currently working on her GED and plans to become a nurse.  “Gratitude is infectious. It makes me want to give back,” she says.