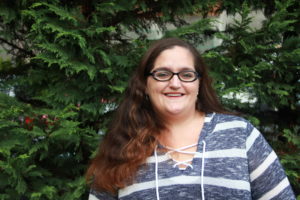 Erica grew up in Tacoma. She knows all the corners and side streets. She has seen both the hope and the hurt that live side by side in this city.

And has experienced both.

Drugs and a constant flow of strange men was the norm at home.

But still, there was a bright spot.

“I was homeless, but I went to church every week for most of my childhood,” Erica remembers. “I went just to be told I was cared about.”

The message of love began to seep into the cracks of Erica’s hard heart.

The Question We All Ask

“I believed in God, but I just never had a relationship with Him,” Erica says.

“I figured if God was real, why would He let all this stuff happen?”

As she got older, Erica stopped going to church. Drugs took over her life. She ended up being beaten by boyfriends, assaulted, going to jail, living in abandoned houses, and feeling like there was no way her life would ever change.

“I was really in denial that I needed rehab.”

But then, something did change. Erica heard about the New Life Program. Not only that, she saw the change it had made in her friend’s and her sister’s lives. She knew she needed it too.

“Seeing them totally different from how they were was just a beautiful thing,” says Erica.

Ready for a New Life

“I was sleeping in an abandoned house the day before I got into the program,” Erica remembers. “I was sick of the violence and the drugs and everything involved with it.”

When Erica arrived at the Mission, she knew that she was finally in the right place.

“I was happy to be in a safe, good place to live,” Erica says.

“It’s provided everything I needed, whereas nobody else I met could’ve helped me this much. It was just an impossible mission.”

But with God, nothing is impossible. Not conquering death, addiction or homelessness. Erica knows that now, and she’s living proof that your gifts make a difference.

Let the Redeemed of the Lord Say So!

Erica, her sister and her friend have all moved on to our Family Life Program. She is continuing to move forward while doing everything she can to give back to the community that helped her so much.

She’s determined to keep telling her story so that others can hear it and realize that there really is no such thing as an impossible mission.

“If I can get better and get out of that life, they can too,” she says.