But a Thanksgiving Meal brings healing and a new start! 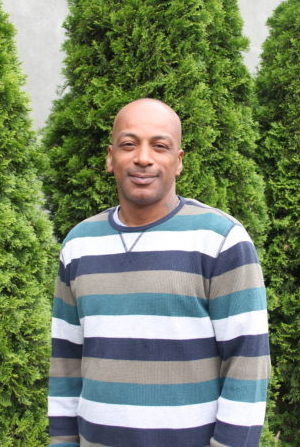 Kenneth didn’t become homeless by choice. When Hurricane Katrina ravaged New Orleans over ten years ago, Kenneth’s life was devastated. Not only was his home destroyed, he lost his mother, a sister and his only brother – three of the 1,833 people who were killed during that tragedy. Forced to stay in a makeshift shelter, Kenneth struggled with the overwhelming loss of his family.

That one single catastrophic event changed his life instantly!

Depressed, homeless, jobless and lonely, a “friend” told him to come to Tacoma where he would help him. Kenneth saved up enough bus fare to come north. That’s when things got worse!

When Kenneth arrived in Tacoma, he found his friend had no place for him to stay, no job leads . . . he wouldn’t even help Kenneth with food!

Alone and in a strange city with no friends or resources, Kenneth ended up on the streets, his depression growing daily.

Eventually Kenneth lost all hope . . . wandering the streets for almost ten years and losing his ability to think or act clearly. He spent nights sleeping in a dumpster until he “graduated” to an abandoned car. He became malnourished and confused.

Then came that fateful night — Thanksgiving night — when he found the Mission.

His stomach growling with hunger, Kenneth came into our dining hall looking barely alive. Our staff immediately welcomed him in and served him a big plate of food. But that wasn’t all. Today, Kenneth remembers:

“What a relief. I see I can take a shower. I can get clean clothes. I can have food, good, hot food. I can have a place to stay. The Mission took care of me. I thank God.”

After ten years of living on the streets, that Thanksgiving meal was the start of a whole new life for Kenneth!

He came back and joined our program. He got the counseling he needed. We provided career coaching, we even helped him get his driver’s license.

Today Kenneth is working full time, and he is saving his money so he can soon move into his own apartment.

And it’s all because someone like you reached out to help at Thanksgiving! That’s the power of a Thanksgiving meal!

“I came here. I had a plate so good. Oh my goodness, the best Thanksgiving dish I ever had. So much food – turkey! I can still remember that.”