Jumping seemed the only answer… 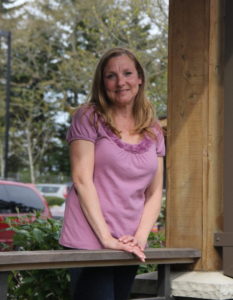 Susan had had enough. Raging alcoholism. Debilitating anxiety disorder. Her relationships all broken, she was homeless, living in her car. And now, her brakes had gone out; she had no hope left.

She parked her car down by the Old Cannery and slowly walked over to the bridge. . . I walked up to that bridge. And I was praying – “God if you can’t kill me, please give me the courage to jump.”

Though 46 years old, Susan never had the chance to understand that this kind of life wasn’t normal. It’s what she had been taught. When she was only eight, Susan’s father died, and  she was left to move in with her mother, who was an alcoholic and drug addict. It was her mother who turned her on to alcohol when she was only eight. She encouraged Susan to drink because she thought it was funny!

By the time she was nine, Susan was raiding her grandparents’ liquor cabinet.

Her drinking escalated through high school, as she partied nearly every night with her friends. After all, it’s what her mother had taught her was normal.

Her addiction spiraled out of control for years. Combined with her terrible anxiety disorder, it finally led to becoming homeless. And it all came to a head that fateful night, when she walked over to the bridge.

Susan doesn’t remember what happened next – only that she woke up in the hospital on suicide watch. Fortunately, the hospital discharged her to us. They knew she had nowhere to go, but they also knew we would provide her with safe shelter, and so much more.

The rest is a miracle! Susan entered our program. And today, for the first time since she was nine, Susan is sober. And she has a newfound hope,

“I can do anything!” says Susan, “Compared to where I was – I was hopeless. All of the instructors, they legitimately care. We’ve all done stuff, and God forgives us. I mean, I just – I thought there was something really wrong with me. But now, because of the program, I’m a changed person.”

Susan’s transformation has been amazing. But it’s not unusual here at the Tacoma Rescue Mission.

And that’s why we provide shelter. It gives us the chance to help the underlying causes of a person’s descent into homelessness.