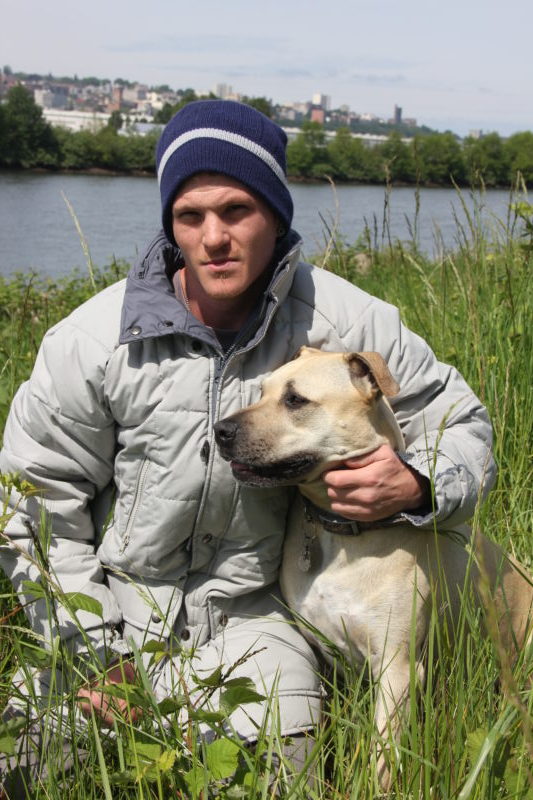 It was the dead of winter and the rains had come. Brandon and his service dog, Yogi, were camped alone by the river. Just a few years before, Brandon held a great job that included travel, money and stability. But now, all he had was a tent and Yogi. In his words, “life had turned sour.”

Suddenly, in the middle of the night, Yogi began barking wildly. Brandon awoke to find himself and his tent in several inches of water . . . the river was flooding!

“It was scary. All of a sudden water was hitting the tent – and I packed up as much as I could and ran.”

Brandon escaped, barely, but lost almost everything he had left. Cold, and with Yogi in tow, he was desperate to find someplace to stay. He was tired of being homeless, tired of the cold and hunger.

“I couldn’t light a fire, because I was scared that the cops would show up and say, ‘Hey, you can’t camp here.’ So I lived without a fire, and it was very cold. If I didn’t have Yogi, I probably would have frozen.”

Brandon and Yogi find the Mission

The next day Brandon found his way to the Tacoma Rescue Mission. At first he was scared that we wouldn’t allow Yogi . . . his service papers had been washed away in the flood.

But we assured Brandon that Yogi was welcome. So Brandon came in and got a hot meal — and a warm, safe place to stay. And he found something more. After spending a few days in such a supportive environment, Brandon has decided to stay, and work on restoring his life:

“I’m waiting to get into the program. I feel that I need more time. I don’t trust myself yet. I think I’m second or third on the list, so it should be any time now. I need to figure out who I am again, instead of relying on someone else.”

So, thanks to people like you who so generously support the Mission, Brandon, along with Yogi, are on their way to becoming whole once more!

So Who Rescued Whom?

Yogi rescued Brandon from being washed away in the flood. And he’s been an indispensable emotional support for Brandon. The irony is that Brandon rescued Yogi from the Tacoma Animal Shelter in 2012! And of course, your gifts are allowing the Mission to rescue Brandon from his addiction and homelessness. That’s quite a circle of rescue!