That’s the most important thing to Shanice Ward. As one of over 100 grandchildren, Christmas was chaotic and fun growing up. 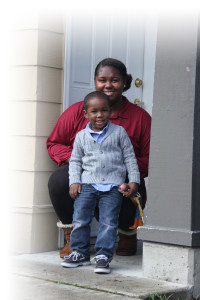 “We’d have breakfast at my grandma’s house, then go across the street for lunch at my auntie’s and dinner at my other aunt’s. It was great!”

But the family’s Christmas traditions Shanice loved so much, came to an abrupt halt one day after school. Her mom called Shanice into the living room and told her they were moving to Florida. She was devastated. They moved later that week.

Moving across country might seem like an adventure to some but for 17 year old Shanice, deeply rooted in her family and friends, it was gut wrenching.

And things didn’t get any better in Florida. Shanice learned that her grades didn’t transfer over as expected. She was told she would have to start over, in the 10th grade. She had only been 2 credits shy of graduating in Washington, so she looked into getting her GED. The program she found was a 2 hour drive away. Impossible.

When she found herself pregnant, Shanice was thrilled. But she was determined to provide her child with the best possible life. So she took a leap of faith, and moved back to Washington.

She lived with relatives, and took on the role of caretaker for her grandmother, until she passed away. Without a high school diploma, she couldn’t find a job to afford her own place.

Thankfully, Shanice learned about the Mission. She and her son moved into the Tyler St. Family Campus earlier this year. It was her first apartment. Shanice worked, got her GED, her driver’s license, paid for a car, and even completed a Health Information Technologies certificate.

“I don’t know where I would be without the Mission . . . probably still jumping from house to house.”

She made great strides in 9 months, and then the news – she had been accepted for subsidized housing. She and Kavien were moving out! This Christmas they will be in their own place.

“I’m excited to decorate our first tree together! I think it will be more exciting for me than for Kavien.”

Shanice dreams of purchasing a house and raising Kavien in a stable home, surrounded by the support and love of family.

Thanks to you, this dream can come true. Shanice has a fresh start, and women like her can provide stable homes for their children because of your support. Thank you for offering hope this Christmas!

From Shanice’s Family to yours – Merry Christmas!